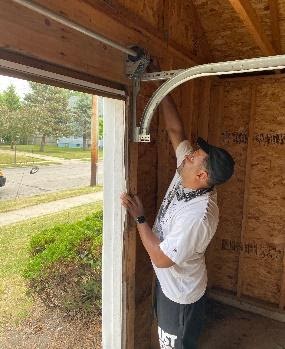 Dartavian came to RVM in 2006. He had just come back to Wisconsin and was looking for a way to connect to the community. He signed up for RVM’s Solutions for Success training class and after three days of training was set to do mock interviews with area HR professionals. He sat down for the interview, and it quickly turned into a heartfelt conversation about second chances. As the interviewer finished his interviews and was preparing to go back to work, he said to Lori Life, “have Dartavian call me on Monday.” After his formal interview with the company, he was hired. He is now in his fifteenth year with the same employer.

Dartavian did not stop there. He knew that he had ground to make up to establish a solid retirement. The second part of his plan was to rehab houses and maintain them as rental properties. As of today, he owns eight properties and only has two mortgages remaining. With a singular focus and determination, he has built a life that has set him up for success and a secure retirement.

In 2016, Dartavian was awarded the Endel Williams Community Asset Award for his efforts in creating clean, affordable housing. He is not only building his retirement; he is making his community a better place to live!
He may not be done! He has been working to build his skills by acquiring trucking certifications with hopes of one day starting his own trucking company. He is doing his research to learn more about starting and running a business. Setting and attaining goals has been a lifestyle for this RVM participant. We are very proud of all he has accomplished!